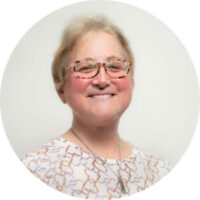 Sharyn Gallatin has over 20 years of fundraising experience, as both a volunteer solicitor and when she moved to the professional side of philanthropy where she assumed the role of Chief Development Officer for the Jewish Federation of Greater Ann Arbor. There she revitalized the Annual Campaign, and the Jewish Foundation, which is the planned giving arm of the Federation. Most recently, Sharyn was the Director of Foundations and Endowment for the Boys & Girls Clubs of Southeastern Michigan.

In addition to her work in nonprofit development, Sharyn has over 20 years of experience as an estate planning attorney, which is instrumental in planned giving and vital to the long-term sustainability of the organization. “I am so excited and honored to join the OGS team. I look forward to hitting the ground running and taking the resource development of this amazing organization to new heights!”

Eric Anderson was with OGS for seven and a half years and came with a wealth of fundraising experience, mostly in higher education. He has been a driving force in securing support from the optometric community to meet the OGS mission. Eric states “It has been my privilege and joy to get to know the optical industry and to make friends with the many donors to this great cause. I strongly encourage optical companies, their leaders and employees, optometrists and other ECPs who have not supported OGS to do so, to give back, to give sight and hope to those around the world who literally need our help to see.”

Anne Marie Hand, Executive Director, North America at Optometry Giving Sight stated “I want to welcome Sharyn and greatly look forward to working with her and taking OGS to the next level! I also want to thank Eric for his years of service and for the brief time he served as Interim Executive Director.”