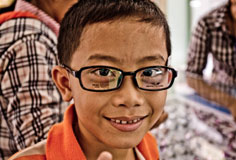 “My new glasses make me feel so happy,” said Trung, a nine-year-old boy from the southern province of Ba Ria-Vung Tau in Vietnam. Trung tells his story of the daily struggles he experienced for several years due to his poor vision.

“For a while now there have been times when I’m at school that I felt dizzy and I couldn’t join in the activities all the other students are doing. I did not feel very happy at those times,” Trung said.

The young boy explained his parents had been told that while he seemed to be experiencing difficulties at school, that this can often happen to children of his age and that he would grow out of it. 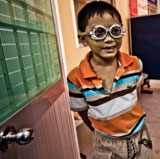 “I hoped that I would grow out of it soon,” Trung said. “But now I know that I don’t have to wait anymore. With my new glasses I can see everything very well and so school will be great. Before, I couldn’t see the lesson board even though everyone else could,” he said.

Trung’s mother said his teacher at the school would be very pleased he now has the glasses he needed. “She urged me to bring Trung here to the eye unit and have his eyes checked. She was worried he was falling behind the other students of his age even though she knew he tried to be a good student. Now things will be different,” she said smiling.

Trung was given an eye exam and a pair of glasses through an Optometry Giving Sight funded project.