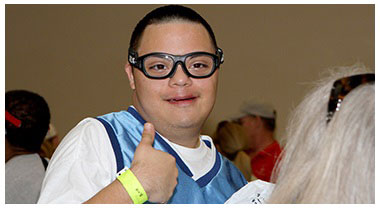 Optometry Giving Sight and Special Olympics together are continuing to have an impact on vision services for individuals with intellectual disabilities (ID) both through the training of vision care professionals and students, directly through vision screenings, and increasingly through working with health facilities to become more inclusive of those with ID.

From August to the end of December 2016, the Opening Eyes Program conducted 11 screenings in 9 different States with Florida and Kentucky each conducting 2 screenings. Over 1,200 athletes were screened at these events, and just over 550 prescription glasses and goggles were distributed.

As a result, a total of over 6,800 individuals with ID received vision screening in 2016, mostly at screenings coupled alongside Special Olympics sporting events, however a growing number of athletes are receiving their screening within health facilities outside of Special Olympics events, which reflects significant progress in the shift towards inclusive health services that are available throughout the year.

With the support of Optometry Giving Sight, two Train-the-Trainers were conducted in Texas and Pennsylvania in October and November respectively. The trainees in Texas were drawn from the San Antonio Optometry School while the Train the Trainer in Pennsylvania was used to train out of State trainees including one from New Mexico (Eye Association of New Mexico), one from Northern California (Visions Optometry) and two from British Columbia (Optiview Eye Clinic). The trainings were coupled with screenings, which saw the trainees and other clinical professionals screen 143 athletes in Villanova and 506 in Arlington respectively.