Sabbir is a 6-year-old boy in first grade at his local government primary school in rural Bangladesh. Sabbir’s father has a tree nursery and earns just enough to feed the family. Sabbir is the only son in the family, so his parents had high expectations of him doing well at school. 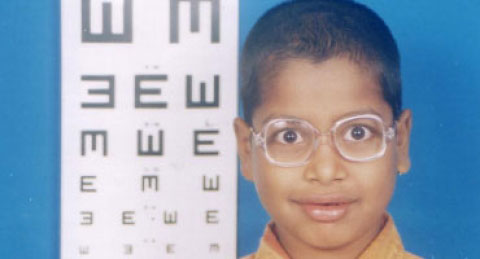 Sabbir was not doing well however, as he was unable to see the blackboard in his classroom. He also found it difficult to participate in activities with other children in the playground. Sabbir did not realize that he had an eye problem, and he never explained to anyone that he could not see. It was a difficult time for Sabbir, and his family were very troubled that he could not do well at school.

One day Sabbir’s teacher attended a ‘Teacher Training Seminar’ at the Symbiosis Primary Eye Care Project (SPECS) project. He learned about many common eye problems affecting young children, including the signs that a child may need glasses. Sabbir’s teacher recognized that Sabbir probably had an eye problem and discussed this with Sabbir’s father, advising him to take his son to the SPECS clinic.

At the SPECS clinic, Sabbir had a full eye examination which revealed that he was very short-sighted and needed glasses. The SPECS clinic provides eye testing and glasses at no cost to children from poor families like Sabbir’s.

Everybody was amazed at the difference that glasses made to Sabbir! Now he can see the blackboard and perform well at school, and he can also play with the other children now that he can see properly.

By educating teachers about eye problems affecting children, everybody in the community benefits. SPECS also conducts vision screenings of primary school children and gives teachers the equipment and training necessary for them to conduct an annual screening of their students in the future.