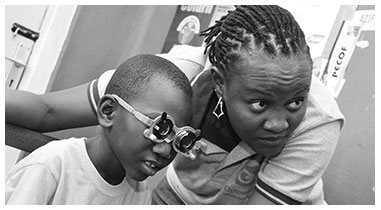 Emmanuel goes to school for the first time

Emmanuel is a 12 year old boy who didn’t attend school. He wished every day he could go with the other children in the village but he had been nearly blind since birth. He spent his days in his village which he knew well enough to get around. His local community tried to look out for him to help him stay safe.

His mother was very unhappy about Emmanuel not being able to go to school. She also wished he could help out with the daily chores as she worked every day in the fields on the family farm. His grandparents used to mind Emmanuel during the day so his mother could work, but his grandmother was becoming more concerned as her eye sight was beginning to dim.

Emmanuel had a cousin, Yusuf, who was very kind to him and used to take time to tell him stories about school and other villages that Emmanuel could not visit. It was Yusuf who helped save Emmanuel from lifelong blindness.

Yusuf had good eyes and was very interested in school. He learnt one day that his teacher had been trained in screening the school children’s eyesight. Yusuf had his eyes tested like all the other children, and all the while he thought of his cousin Emmanuel. He told his teacher about Emmanuel and sadly described his blindness.