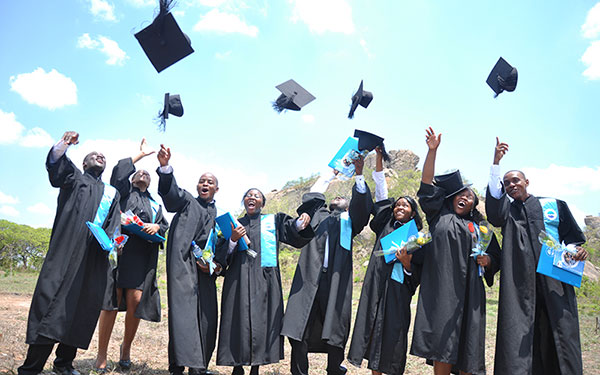 The first class of degree-qualified optometrists have graduated from Universidade Lúrio in Nampula this month, becoming the very first optometrists in Mozambique.

Nine optometry students graduated alongside peers from other health sciences disciplines, in front of the first lady, Maria da Luz Guebuza, at what was only the second graduation ceremony in the university’s history.

In a promising step for long term eye health in Mozambique, four of the graduates have been employed at the university as members of the teaching faculty and in doing so, will become the first local members of staff.

One of those students is Joel de Melo Bambamba, who graduated top of the class. Joel, who is the eldest of five brothers, decided to study optometry because his grandfather was blind and his brother has serious vision impairment. Growing up, there was very limited access to eye care services. Although the course was challenging, Joel said he was very excited to graduate.

“I am very happy to have finished,” he said. “To have reached a dream of mine, and my parents.”

Joel was awarded the Jill and George Mertz Fellowship by the American Optometric Foundation and is currently studying for his Masters. He will return to Nampula next year to begin his faculty position.

James Loughman, who is a Professor of optometry at Dublin Insititute of Technology and one of the project leaders of the Mozambique Eyecare Project, said the graduation is a source of great pride and joy.

“To see these first optometrists emerge in a country with little in terms of eye health resources means that the combined efforts of so many people over the past five years have come into fruition,” he said.

“The first graduates will pave the way for the development and integration of a profession into the public health system in Mozambique. They are the future educators and leaders of eye health, not just in Mozambique, but potentially for Lusophone (Portugese-speaking) Africa.”

Prof Loughman, who is the Chair of Optometry Giving Sight’s National Committee in Ireland, also highlighted that research in Mozambique has revealed that spectacle coverage for uncorrected refractive error (URE) and presbyopia is virtually non-existent.

“As URE accounts for two thirds of the observed cases of visual impairment, the capacity of optometrists to fill this void is tremendous, and represents a real opportunity to transform the lives of those in need of eye health services,” he said.

Optometry Giving Sight is funding partner of the Mozambique Eye Project, which is a project of the Dublin Institute of Technology, the Brien Holden Vision Institute, Universidade Lúrio, Irish Aid & Higher Education Authority in Ireland, and the Univeristy of Ulster in Northern Ireland.