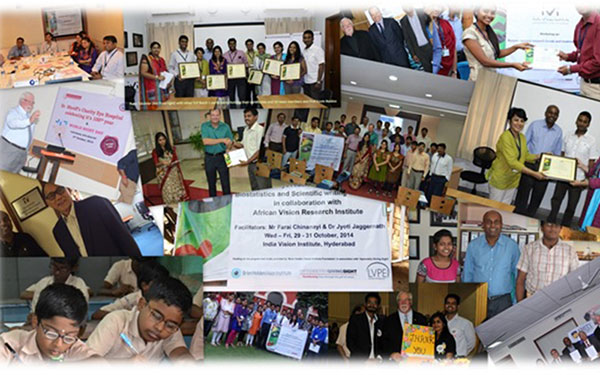 131 million people in India, including 11 million children, are blind or vision impaired from being uncorrected or under-corrected. Most are in rural areas.

Optometry Giving Sight, in association with founding partner the World Council of Optometry, is pleased to be a significant contributor to a program designed to make India a leader in eye health within the next 20 years. The Development of Optometry, Blindness Prevention and Vision Care in India program is implemented by the India Vision Institute (IVI), which was established by the Brien Holden Vision Institute and LV Prasad Eye Institute.

The building of local capacity is a major objective of the program, and over the past 36 months, IVI has conducted 58 capacity building workshops and 30 seminars; offered 466 registration scholarships, 15 student research grants, 17 travel grants and 2 higher education scholarships benefiting over 4300 optometry professionals.

They have also partnered with the Association of Schools and Colleges of Optometry to organize an Optometry Professional Development Workshop; and a workshop on Refraction Techniques & Clinical Implications was organized in partnership with the Indian Optometry Federation.

“The Indian Optometric profession in India is at a very important and exciting stage,” said Vinod Daniel, CEO with IVI. “The support provided by Optometry Giving Sight through its donors and sponsors is assisting the country in both building the necessary short term technical capacity in Optometry as well as the long term structural setup. Over the next two decades, India will become a global leader in eye care”.

Another key objective of the program has been the establishment of the Optometry Council of India. OCI is a professional self-regulatory body responsible for establishing and maintaining high standards of optometry education and recognition of optometry qualifications in India. To date, more than 500 optometrists have registered, including optometrists from Essilor India and Lawrence & Mayo. The registration is for a period of 3 years following which the optometrist has to renew the registration.

“Optometry as a profession in India is undergoing a sea change and history is being made with regards to affordable eye care, “ said Lakshmi Shinde, CEO of OCI. “The profession is getting more organized in terms of merging the different levels of optometry and self-regulating itself through an independent council. This, in concert with other important initiatives, will go a long way in providing quality eye care service to the public in India”.

IVI also has its eyes firmly on the future with the establishment of the Young Leaders Program, which was launched with a two-day workshop in Hyderabad on 12-13 April. The second workshop was held at Chennai on 11-12 October 2014. A group of 10 young optometry professionals is being groomed under this program to develop as future leaders of Indian optometry. The program includes practical demonstrations and theoretical sessions conducted by renowned Indian and international experts in the area of optometry, eye care and public health management.